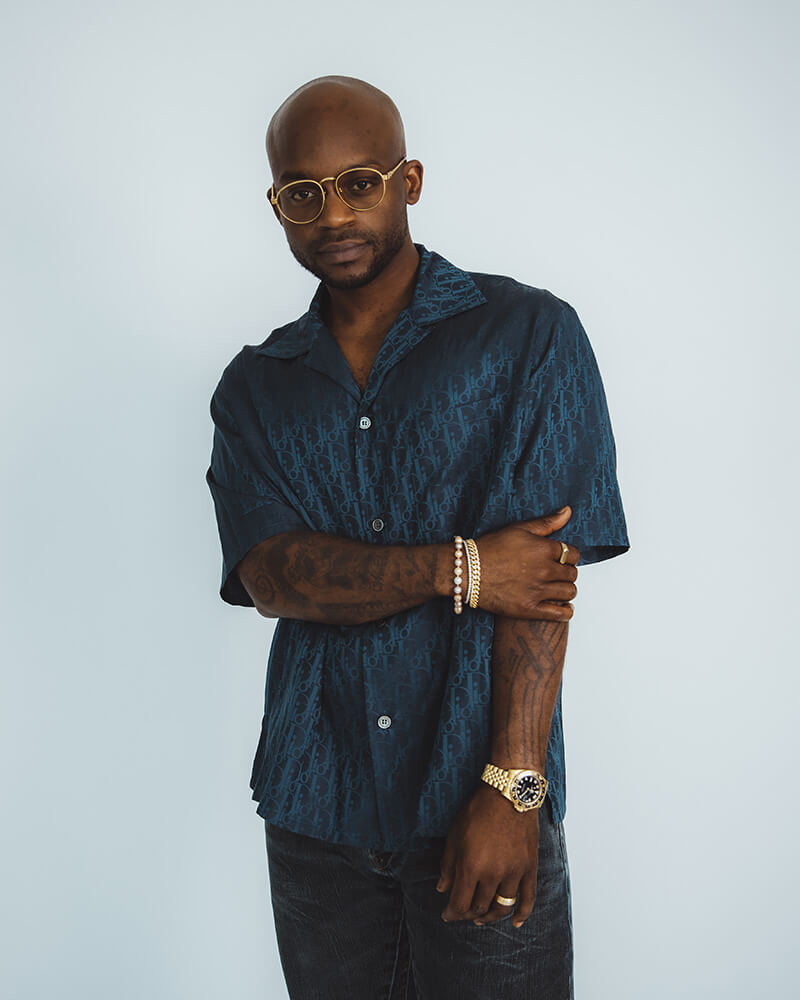 “Everyone is trying to get me to drop ‘DJ’ from my name. I feel like for us DJs that go on to become execs, etc. and choose not to drop the ‘DJ’ from our names, it’s because DJing is what got us here. It’s not like I went to school for A&R, and then became an intern… no! I got to where I am today spinning parties. Without that I wouldn’t where I am today. The reason I am here is from making people dance,” explains DJ Tay James.

From his irresistible live shows and an unmatched A&R prowess displayed on countless Justin Bieber records, to changing and creating the scope of fashion trends, DJ Tay James achieves greatness across the globe. Everything the entertainment alchemist touches turns to gold, platinum… and even pearls.

It started behind the decks where at age 16 the Baltimore-bred James began an epic journey to prominence by connecting people through music. Marinating in and thriving upon deep-seeded roots in DJ’ing, today the party-starting-wunderkind has risen to become one of the most sought-after talents in the business, parlaying his portfolio to include titles such as “brand ambassador” and “A&R genius” to his DJ-steeped empire.

When Justin Bieber tapped him to join his live show as his tour DJ in 2009, James was a mere two months out of college. Over a decade later, James is still traveling the world alongside the pop sensation, introducing talent and throwing down fresh beats to sold-out crowds around the globe.

It was only natural that Bieber would bring his trusted confidante into the studio to flex his finely-tuned muscles on production. For James, A&R is a means to use his DJ ear and apply it to making music and exactly what led his to working on Justin Bieber’s 2021 Justice LP, which ended up nabbing eight GRAMMY nominations including ‘Album,’ ‘Record’ and ‘Song of The Year.’ James was also instrumental in bringing Bieber on board for the Wizkid featuring Tems “Essence” remix which went on to be one of the hottest songs of 2021, landing the artists in the upper echelon of the Billboard Hot 100 chart and marking the first ever Nigerian song to hit the Top 10.

While these achievements alone are enough to fulfill any jockeys’ wildest dreams, James has more stamina in his pinky than most mere mortals. His hustle behind-the-scenes combined with radioactive magnetism on-stage have yielded his name in lights for headling slots at A-List venues and residencies at Zouk (Las Vegas), LIV (Miami), TAO (Chicago) and Marquee (New York). He is also called upon by an extensive list of celebrity and corporate clients such as Dr. Dre, Kevin Hart, David Chappelle, Google, Facebook, Apple, Nike, Don Julio 1942, and Sprite to DJ their private events. With performances on spots such as the VMA’s, Saturday Night Live and NPR’s Tiny Desk, James’ talent is lauded by leading players across the entertainment industry, galvanized by his steadfast fans time and time again.

Be it sonically, telephonically or electronically, DJ Tay James is the glue that connects the masses, his impact is akin to the perfect live mixes he’s known for bringing—a 100-percent organic experience. “A&R is just a way for me to take my DJ ear and apply it to making music.”

This ethos has been applied to every collaboration James lends his celebrity status to. His partnership with fashion-forward, Polite Worldwide: Conscious and Sustainable Products put pearls back on the style map. Born out of his desire to be part of a company that could help change the world with clothing piece by piece, James joined Polite for a partnership that resulted in the recent pearl bracelet craze, after decorating his enviable rolodex of superstars as well as getting them into Saks 5th Avenue. If that weren’t enough, the renaissance man also runs brand management for denim company, Purple, throwing events that align and heighten the streetwear-meets-luxury-fashion hybrid.

“I just want to help influence as much as I can in a positive way,” says James. “I think I was put on Earth to bring people together through music and just play my part in that realm. I may not be able to change the world, but whether it’s in music or fashion, I’m going to try to just do my part.”